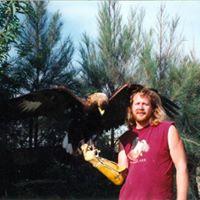 Call now to find out more!

How we made Aplomados available to US falconers

In the mid-1990s I decided to start a raptor breeding facility for hawks and Eagles in the country of Mexico. Shortly later, Martin Lee's partner in Canada got me all fired up about Aplomados. What I did not know at the time was that the indigenous Aplomado species in Mexico were not a good fit for importing, or as good for falconry as the South American subspecies, but I was full steam ahead and obtained pairs and permits to house and breed hawks, Eagles and (Aplomado) falcons in Teotihuacan, Mexico where I had a second home with a view of the pyramids of the Sun and Moon. Eagles were my primary interest, but I had hopes of being able to legally import multiple species of raptors someday. I soon met Harry McElroy and through Harry I met Jim Nelson. Jim had a very deep passion for Aplomados, much like my passion for Eagles. Jim had really done his homework, I remember how he told of the history of the early explorers bringing back a bird that the European falconers then called the Alethe and how it was the partridge hawk "sine qua non" (according to the old writings, could supposedly out-fly a peregrine under some circumstances). Jim was sure it was the Aplomado and was determined to prove Aplomados could catch Hungarian partridge to provide further evidence that Aplomados were the Alethe of Renaissance Europe.

In my mind, it was easy to see the proverbial writing on the wall. This was simply a needed next step for American falconers and it needed to be accomplished. Put simply: it needed to be. Furthermore, I could allow myself to become a useful instrument in furthering that worthy goal, even though to this day I have never flown an Aplomado or professed I wished to, I am an Eagle guy. However, without my participation the setback for American falconry would be decades. I was uniquely in the right place, in the right time, with the right skills, to get the job done with Jim Nelson's help. Jim continued to remind me of how important this all was and of his enthusiasm for the non-native Aplomado subspecies.

I first met Jose Antonio on my second visit to Peru. At that time, he had just produced his second captive Aplomado baby. We got along well, but it would be a few more trips to Peru,over more than a year, and the threat of another breeding project I had funded in Argentina before Jose Antonio would agree to sell us both male and female Aplomados.

Meanwhile Jim Nelson, applied to add the South American subspecies Aplomado to the list of approved species (20 pairs) and got them approved for import to the WFA breeding co-op. This was really big news.

So to test the waters on my importing skills, I imported some Peruvian Harris hawks. I lost a fortune on that venture (a separate story) but I learned the in's and out's on importing birds to the USA and exporting them from Peru. This was a huge help when it came time to import Aplomados. I traveled with the birds on each flight when I imported the birds and there are simply a host of issues that come up on both ends. It is fraught with red tape and contradictory regulation that makes one wonder how anybody ever accomplishes such a task ever. Then there is quarantine. You would think by the time the birds entered the USA legally your troubles would be mostly over, but they aren't.

So we had not yet secured export permits from Peru when there was an upheaval with the government of Peru, not to mention I went through a divorce causing problems regarding my former Mexico property. Not to be deterred, I eventually secured export permits from Peru after repeated efforts and delays. It really pays to speak the language. Even still this was no small feat, I also remarried.

It would be the latter part of the year 2000 when the first Peruvian Aplomados came into the USA, then quarantine (another story). Now we had the first legally registered Peruvian Aplomado pair in the USA plus a few females with hopes for more in the future. Under the rules we could NOT sell these birds outside of the co-op, and we were required to "maintain a diverse gene-pool" which also followed our goal of placing most of the babies hatched in the USA in the hands of breeders. I'll never forget loaning one of these first imported Aplomados to Harry McElroyand when he got the news he drove straight to my house in California (from Arizona). I allowed Harry to net the bird of his choice and then he paused with the bird in the net and he turned to me and said, "You know? I wasn't sure I would live to see the day I would be able to fly another Aplomado again." It was touching. I also loaned one to Karl Karl Gene Kerster and it was Karl that first announced the potential of Aplomados.

So we eventually imported more pairs of Peruvian Aplomados and worked very hard to reproduce them, we bred dozen of them and group fed and raised them at our home. Jim Nelson kept (still keeps) meticulous records of every bird hatched and it's bloodlines. He calls it the Aplomado studbook (but many do not send in their data). We were careful to place as many Aplomado pairs in the hands of breeders as possible, yet still allowing those and a few others to be flown in falconry so that the word could get out about this wonderful bird. During this time Jim accomplished his own goal of catching wild Hungarian (grey) partridge with Aplomados, putting to rest an old "mystery."

The fun part really started when Jim Nelson ran into a Blueberry farmer and started getting him excited about using Aplomados for depredation abatement. Prior to meeting Jim Nelson, this farmer had been killing 1,000 birds per week with shotguns under a government depredation permit, since at that time the government had only recently started offering abatement permits to falconers (years after we started importing Aplomados). As predicted, the Aplomados were a great fit for the job. The blueberry farmer was now killing only 3 birds per week, not using any guns, and getting better results. These 3 birds were not enough for the Aplomados to eat though, and their diet hence needed to be supplemented.

Jim and I continued to breed Aplomados and place most of them in the hands of breeders for many more years. 2010 was my last year breeding and I never had a profit on that venture. I will say my success with raising the babies went up when I turned them over to my wife to raise, one year we raised 25 baby Aplomados along with some ferruginous, and Peruvian Harris's (hatched) in our living room. I accomplished what I set out to do and that is why Aplomados are available to anyone with the money in the USA.

Also of note is that the numbers of "Peruvian" Aplomados (Falco femoralis pichinchae) now in the US are so much greater than they were in 1998 (zero at that time). Jim tells me it has been several seasons since he has received banding information from most breeders, and he welcomes banding information from all those who have produced Peruvian Aplomados, this info needs kept up. I have done my part to get us this far.

The above article is a true recollection and was solicited and written for the California Hawking Club President Adam Chavez in November of 2018 stating that he was going to put it in the CHC journal. Your writer retains emails to confirm this.

Close
warning
Are you sure you want to cancel all remaining uploads?
|
View on Mobile