Aplomado falcons are utilized for the direct pursuit of avian quarry. This type of hunting is some of the most exciting in falconry. These predators have a tremendous range of potential quarry from sparrows to rooster pheasants. The following aspects of aplomado falcons contribute to making this bird an ideal falconry companion:

3. Hunting drive: aggressive and courageous with stamina that won't quit

4. Cooperative hunting: Casts in the wild are commonplace as well as using mane wolves to flush quarry. (similar to hunting with a dog)

5. They hunt from the fist, head, t- perch, tree or low waiting on positions.

6. Tolerant of extremes of temperature and environment. Although they perform their best when flown in an open land, they will go into cover to take quarry and can be flown in a more enclosed situation.

7. Slips are available in all environments. Aplomados will take short slips like an accipiter or a long slip like a Merlin falcon. 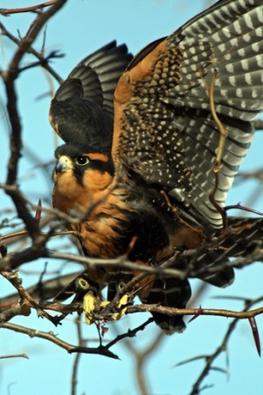 Now have the unique opportunity to experience the excitement and enjoyment of flying this amazing raptor. The prices for this bird are dependent upon availability. We are hoping that the population of Aplomados in this country grow and remain strong for future generations of American falconers. These birds are only sold to licensed general or master class falconers; however, some states allow apprentices the opportunity to fly captive bred raptors. These birds are a native species and covered by the MBTA and USFWS.

Jim Nelson's interpretation of the name Aplomado is quite different. He has looked up the definition of aplomado as a root Spanish word. On at least one major site (Babylon) it is defined as: "sure of oneself." The term alethe was derived from the Greek meaning "full blooded or valiant." I believe that aplomado is just another way of saying alethe. I have published this belief in various posts on the internet and am including it in my article on aplomados for the upcoming edition of North American Falconry and Hunting Hawks. I am disputing the definition of aplomado as lead colored, and that Babylon and other Spanish-English translation sites support my claim through their most popular translation of: "sure of oneself" and that translations relationship to D'Arcussia's assertion that "alethe" comes from the Greek meaning full-blooded or valiant.

Rodrigo Hernandez, a Mexican falconer said " in the area that I live in Mexico, the word aplomado is very commonly used by older generations to describe someone who is brave, bold, cocky if you will. I just thought I would let you know."

Call now to find out more! 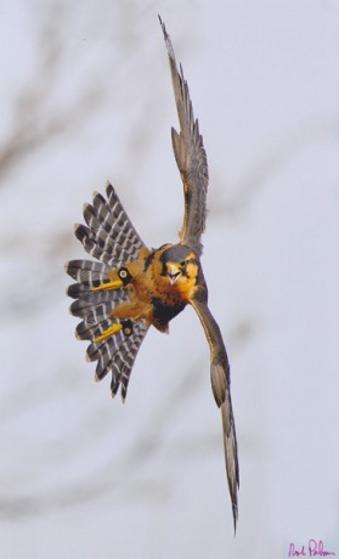